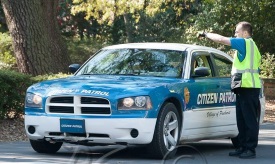 Citizens on Patrol are a special group of Law Enforcement Volunteers. As the name implies, Citizens On Patrol are Citizens who, after being screened, background checked, and trained by their local law enforcement agency, patrol their communities acting as "Eyes and Ears" for law enforcement.

Citizen Patrol groups have been in use within the United States for over 20 years. The number of individual Citizen Patrol Volunteers within the United States is estimated to be over 75,000 with groups in every state of the nation. While no standard exists for what C.O.P. groups can or cannot do, there are some common themes which are shared among most groups. In addition to wearing identifiable uniforms and driving in marked patrol cars, the most common thread is acting as "Eyes and Ears" for law enforcement.

By patrolling their community, on a regular basis, usually in 4-8 hour shifts, Citizen Patrol Volunteers become more familiar with their community and are better able to recognize "suspicious" activity and notify the authorities. Due to their focused patrol activity, it is not uncommon for C.O.P.’s to observe crimes in progress. C.O.P.’s do not take enforcement action, they only observe and report. Citizen Patrol Volunteers are not authorized to carry weapons and are encouraged to avoid physical contact. C.O.P.’s greatest weapon is their established bond with local law enforcement and their ability to communicate directly with them by radio or cellular phone.

Other common duties performed by Citizen Patrol groups is traffic control for school traffic and at accident scenes, special events, crime scenes, fires, in addition to focused patrols for crime deterrence. By utilizing C.O.P. groups for such basic yet needed tasks, the Pinehurst Police Department is able to spend more time on patrol and focus on their primary mission. Another benefit to the community and the police department is cost savings. In addition to budget savings, active Citizen Patrols can reduce crime by an average of 20 percent.