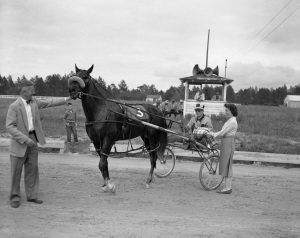 In 1916, Leonard Tufts, son of Pinehurst founder James Tufts, helped form the Pinehurst Jockey Club and was named the first president. Among its members were owners and trainers of standardbreds, thoroughbreds and polo ponies. By the 1920’s the track was being turned into a winter training facility. Sometime around 1928, several prominent figures in harness racing discovered the Harness Track.

Doc Parshall from Ohio and Homer Biery Stable, trained by Charles Lacey, won a combined 130 races in the 1937 racing season. In the 1937 Christmas issue of The Harness Horse Magazine, the banner read “Pinehurst NC, Where Champions are Made.” The combination of the article and the Biery/Parshall wins helped give the Pinehurst Harness Track the attention that it needed to draw new trainers to the track.

Their final accomplishment was to have the Pinehurst Harness Tracks placed in the National Register of Historic Places on November 22, 1992.

In 1995, the Pinehurst Village Council turned the Pinehurst Harness Track over to the Parks and Recreation Department to operate and maintain. The Harness Track employs five people, has 18 barns, 2 blacksmith shops, tack shop and restaurant. Spring through fall is kept busy with events such as dressage shows, hunter and jumper shows, annual dog show and polo matches. Winter standardbred training at the tracks takes place from October 1st to May 1st
.
The Pinehurst Harness Track is also home to the historic Fair Barn. The Fair Barn was built in 1917 to house the annual Sandhills Fair. In 1932 a tornado badly damaged the Fair Barn. It was repaired and used as a horse stable. In 1996, the Pinehurst residents formed the Pinehurst Historic Preservation Foundation to restore the Fair Barn to its original use as an exhibition hall. Restoration of the Fair Barn was completed in the fall of 2002.

Free viewers are required for some of the attached documents.
They can be downloaded by clicking on the icons below.